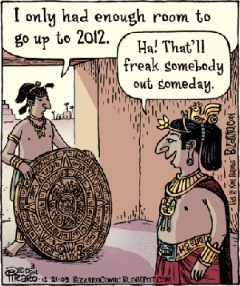 Being only 2 years away from 2012 now and with the recent increase in earthquakes & weather pattern disturbances, many of us are starting to wonder about what will happen to us and the planet as we approach 2012. In my work, I am faced almost daily with clients who have questions about this big date and what it will mean for them. Knowing that many of you have the same questions brewing in the back of your mind, I thought I would share my insight with you regarding this curious date.

According to Mayan predictions, the 2012 date simply marks the beginning of a new era that is founded on measurable & predictable astrological cycles. To put it simply & practically, looking toward the heavens from our vantage point on earth, we can recognize what appears to look like a giant wheel in the night sky that the stars appear to be fixed in and revolve around. This circling pattern is known as the “precession of the equinoxes” and it takes 25,800 years for one precessional cycle to complete itself. During each cycle we are able observe distinct alignments in the heavens between the stars and the planets of our solar system. On four occasions within the 25,800-year precessional cycle the sunrise of a solstice or equinox aligns with the equator of our galactic centre. The last time it occurred was on a fall equinox 6,450 years ago, approximately the dawn of Old World civilisations. As you can see, this alignment is on the infrequent side. On Dec 21, 2012, which is a winter solstice (Northern Hemisphere) our sun will align with the galactic core once more.

Although there is no scientific substantiation for the possibility of there being any kind catastrophe triggered on our planet by this alignment, scientific evidence does indicate that there is a massive black hole at our Galactic Centre that is the main source of the gravitational pull in our galaxy. This is what our sun will align with on Solstice day of 2012 for the first time in 6,450 years. Because of the gravitational energies involved with our galactic centre, some people belief that both energetic & geological shifts could come with this alignment that affect the earth, it inhabitants, our atmosphere & inevitably the way we live.  This could be compared to way we know the moon affects our psyche & the tides, only on a much grander scale.

There are many hypothesis about what could happen as a result of our sun coming into this exceptional alignment with the galactic centre but the truth is that our winter solstice sun has already been in alignment with the nuclear bulge at the Galactic Center (the bright & wide region of the milky way visible to the naked eye) for many years now. So the coming winter solstice of Dec 21st, 2010 will really be only more accurately marking the moment in the time that the winter solstice sun aligns with the actual equator of the galactic centre.

It is possible that as we move into that alignment over the next two years that we many notice subtle inconsistencies regarding gravitational & electro magnetic energies that could affect the earths core, crust, atmosphere, weather patterns & even electronic devises. But ‘Doomsday” or “Armageddon” on 12/21/2012? …Not so much.

My guides tell me that Dec 21st, 2012 is marking the dawning of a new age, new consciousness, new life, new awareness and innovation. It’s the dawning of a peaceful, loving, helpful, supportive, conscious, cooperative cohabitation of our earth. This is all in alignment & divine order with what the collective unconscious is already projecting & holding the space for manifesting here on earth –  global holistic healing of humanity, society & the earth we live on.

So, what can we do now to help prepare for and maximise the full usefulness of these shifts? Stay tuned for part two next month….