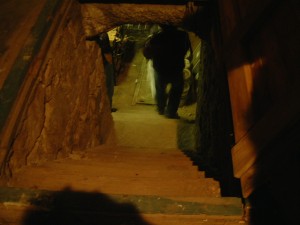 Well, I did another paranormal investigation this past December in Kingman AZ (on the border of Nevada) I thought I’d share my experience with you for those interested in the topic….

As usual, I know nothing of where I am going until I get there. Typically, the psychic on the team is not told anything of the history of the place, or other details so that the rational mind does not interfere with psychic input.

As it turns out we ended up at the “Brunswick Hotel” (you can probably look it up on line) in Kingman AZ. Its now being run as a hotel/restaurant and used to be a brothel back in the day. A soon as I arrived I could feel the brothel vibe. It felt actually like a fun, partying kind of vibe. So most of the activity I felt there was ‘residual” activity (just old energies recorded into the atmosphere and replaying themselves) relating to the old brothel days but I did almost immediate upon entering connect with the actual spirit of a little girl. This is what I would call an ‘intelligent’ haunting. (paranormal activity caused by an actual interactive, living entity). In the area I sensed her the most, I clairvoyantly saw her playing with a ball that looked like one of those old blow up beach balls and she kept telling me that she was waiting for her mommy. Seems that she has been just waiting there and playing for a very long time. When I psychically asked the little girl how she died, she just kept showing me an image of her legs being deformed and I didn’t quite understand it. I thought maybe she had polio or something. As it turns out, after I told the crew what I was experiencing, the hotel manager who was showing us around told us that there was a little girl who lived there and died from falling off of a stairway landing, landing on the floor below (I guess she must have broken her legs during the fall). He also told us that the little girl spirit is people report as seeing the most at the establishment. 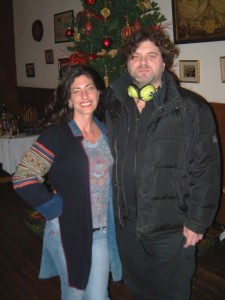 Me and EVP specialist Michael Espisito

The restaurant was open for business while the investigation was going on so there was allot of noise and distractions and it was definitely not an ideal setting for an investigation. I’m sure all of the background noise made it difficult for the EVP specialists. I know it made it difficult for me to concentrate on some levels but I still feel great about the information that came through. I definitely feel that the overall investigation could have been more thorough had we gone when the business was closed so there was more quite.

The investigation was videoed & segments will be included on a DVD called ‘dead whisper 2″ Ill keep you all posted.

One Response to Paranormal Investigation of Brunswick Hotel